1.1 Faceless Assessment, a component of the Turant Customs programme, is a path-breaking initiative aimed at introducing anonymity and uniformity in Customs assessments pan India.

1.2 Overview: The journey towards Faceless Assessment has been long. Decades ago, goods imported into India were assessed for Customs duty at the border by jurisdictional Customs officers on the basis of physical documents. The subsequent introduction of computers led to the automation of assessment. This was followed by a robust digital risk management system (RMS) for Customs clearance with minimal checks while interdicting risk-prone cargo for assessment and examination. In 2012, the Customs Act 1962, was amended to introduce self-assessment by importers/ exporters themselves. While digitization helped in streamlining of procedures, yet disparities in assessment prevailed due to interpretation issues. Customs officials recognized a dire need to provide uniformity and certainty in assessment practices. It was also clear that anonymity in assessment and load balancing of import documents that are required to be assessed would bring about more efficiency and help improve the speed of Customs clearances across India. This was the trigger for the conceptualization and development of Faceless Assessment.

Overview of Customs processes before and after Turant Customs

1.4 At present, the Customs Zones, and Commissionerates are organized in different ways, as follows:

1.5 It was seen that despite a centralized automated IT framework for carrying out Customs assessment, the varying assessment structures in the Zones were not compatible with the CBIC’s mission of having a uniform and standardized Customs assessment practices. Moreover, as the assessment was being done in the port of import itself, local assessment practices would invariably creep in, despite all attempts at standardization. The different structures were also found to contribute to differences in dwell time of cargo, thereby bringing down the overall efficiency. Thus, it was clear that a fundamental change is warranted to meet the objective of the CBIC in providing the most efficient, transparent, and standardized Customs assessment experience.

1.6 The new Customs assessment structure moves away from the physical constraint of assessment by local Customs officers at the Port of Import. Faceless Assessment is being implemented taking into consideration the above-mentioned different structures of Customs zones and commissionerate. It redefines the roles of Customs officers for assessment, examination, and other related processes along with changes in ICES and creates a superstructure of Faceless Assessment Groups (FAGs), Port Assessment Group (PAG), National Assessment Centres (NACs), and Turant Suvidha Kendras (TSKs). The new dispensation virtually connects Customs assessment officers from different jurisdictions and provides for enhanced level monitoring of Customs assessments based on the assignment of import clearance documents by the Customs Automated System (CAS) to officers of the FAGs irrespective of the port of import of the goods.

1.7 A pilot of the initiative was initiated last year by CBIC and post validation of the expected outcomes, it has been decided to roll out the programme nationally. These Pilot Programmes helped test Faceless Assessment first in the same zone, then across zones. Faceless Assessment is now being extended across all Customs ports in India to usher a more modern, efficient, and professional Customs administration, with resultant benefits for trade and industry.

2.1 Faceless Assessment is based on the Customs Automated System assigning a Bill of Entry (BE) that is identified for scrutiny (non-facilitated BE) to an assessing officer, who is physically located at a Customs station, which is not the port of import. As aforementioned, the objectives of the initiative are to:

▪ Anonymize the assessment process by removing the physical interface with Customs

The Faceless Assessment institutional set up has two levels, i.e., (i) Local and (ii) Virtual

● It will have one Port Assessment Group (PAG) to assess cases referred to by the FAG in specific circumstances.

● Turant Suvidha Kendra (TSK) to be set up at Port of Import for various document/ report submission/ generation for the assessment.

Dashboard for Port of Import Commissioner 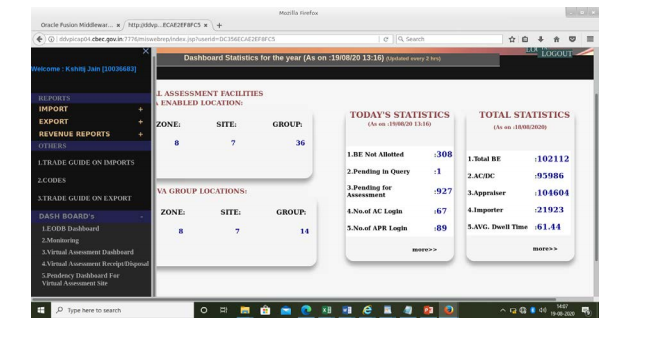 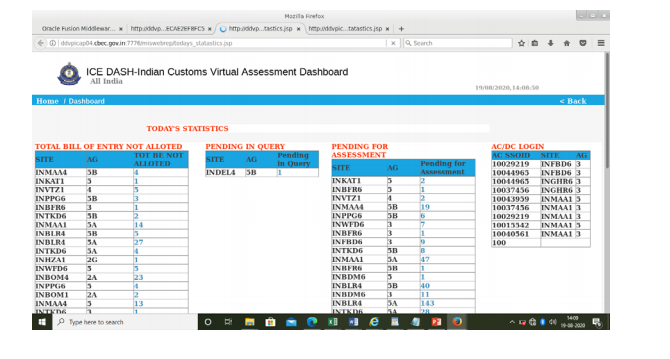 i. All functions pertaining to the BE which are not marked to the Faceless Assessment Group by the Customs Automated System.

ii. BEs that are referred by the Faceless Assessment Group to the port of import, for any reason.

iii. Handling of issues arising post assessment, relating to the BEs which were handled in the Faceless Assessment Group.

● Carry out any other verifications that may be referred by FAGs;

● The debit of documents/ permits/ licenses, wherever required;

● Handle queries related to assessment, and

● Other functions determined by the Commissioner to facilitate trade