The gist of Case:

A complaint was filed by Sh. Vinod Kumar, Dy. Commissioner of Customs, IGI Airport alleging therein that online frauds are going on in the name of Chief Commissioner of Customs (Delhi Zone) and other customs officers. Instances have come to notice wherein people are cheated by unscrupulous elements by promising to parcels/couriers from aborad at IGI Airport, New Delhi to people in India against payment of some amount in the name of Custom duties. Every day several phone calls are being received at the Customs office that the Customs officers are asking money to clear Parcel/Courier. The fraudsters are also using names and letterheads of various senior officials to dupe the people. Hence, an FIR is registered to unearth such type of racket/conspiracy. Thereafter, after the preliminary inquiry, the present case FIR No. 192/2020 u/s 420/467/468/471/120B IPC was registered at PS IGI Airport, and the investigation was handed over to DIU of IGI Airport.

During the course of the investigation, the staff of DIU was continuously working in this case for any breakthrough and collected all the relevant and material information. Finally, the hard work of the team bore fruits and on 06.09.2020, one alleged HDFC & ICICI bank account holder Shelly Achhumi @ Sttaccy D/o Luvishe Achumi R/o Mahavir Enclave, New Delhi, Age-41 Yrs permanent resident of Nagaland was traced and later arrested, who had provided her account for 8 % commission to other co-accused namely Christian Anthony Maduneme @ Chris S/o James, a Nigerian National residing at Noida, Age-32 yrs. On sustained interrogation accused Shelly revealed that he handed over the details of account numbers and SIM cards to Chris. The Police custody remand of all the five accused persons has been obtained and further investigation of the case is in progress.

Alleged persons used to influence the mindset of the victims and took advantage of their emotions on the pretext of marriage/friendship. In one such case, the accused persons contacted the victim through the matrimonial site and got the personnel mobile number/Facebook id/WhatsApp number of victims namely Subir Bose. Thereafter the alleged person started contacting over phone/chat. The alleged person impersonated herself as Anita Saha (Amsterdam) and desired to visit India for marriage/tourism purposes. On arrival in India, she posed that she had been intercepted by Customs officials at IGI Airport due to carrying articles & jewellery beyond the permissible limit. Here the other alleged persons impersonated themselves as custom officials and directed the victim to pay a Custom fee Rs 47,900/- and another subsequent amount in Indian bank accounts. Slowly and steadily the alleged persons demanded more money in terms of different grounds ie charges & levies fee, Duty fee. Believing the words of the alleged persons, the victim followed the instructions one after another and deposited huge amounts of money in different Indian bank accounts as provided by these gang members. From this particular victim, the accused persons could extract more than Rs. 69 lakhs so far. Similarly, alleged persons also cheated some other persons with the same modus operandi. Further investigation in the case is underway.

Profile of the Arrested Accused persons:-

2. Shelly Achhumi @ Sttaccy D/o Luvishe Achumi R/o RZ-G-55, 4th Floor, Mahavir Enclave-1, Palam, ND, Age-41 Yrs resident of Nagaland. Qualification-Graduate. She used to work in an NGO. Later due to lockdown measures and no source of income, she provided her accounts to online fraudsters on an 8 % commission. 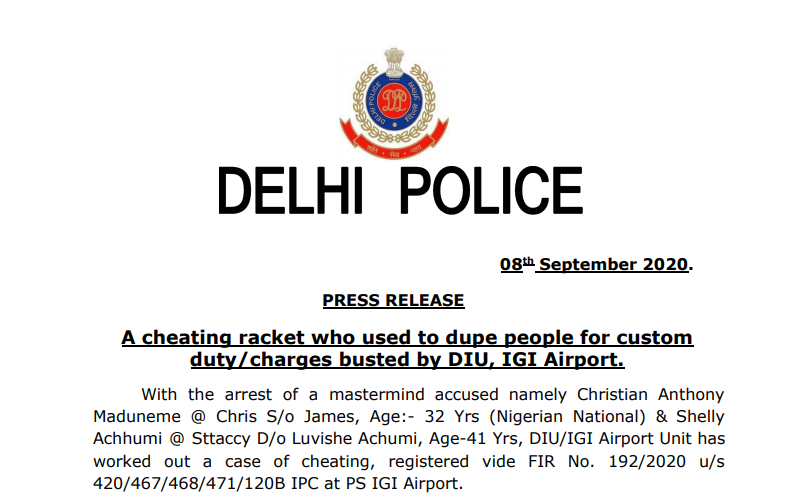