Force Majeure Clause in any commercial contract plays a very crucial role in the occurrence of any unforeseen event and for this, every contractual party has to make sufficient provision while finalizing contractual terms. The purpose is “to safeguard the performing party from consequences of anything over which he has no control.” Its importance has now been identified after the disruption caused by Covid19 which later on declared as pandemic and resulting in which the performance obligation under several commercial contracts has already been disturbed. Many of such performance has now become deferred or either cancelled by either of the contracting parties but now the basic question is its consequences and resulting loss/damages.

Force Majeure is a French phrase that means “superior force.” Though the Contract Act does not specifically defines its meaning but its reference can be from Sec. 32 and Sec. 56 of the Indian Contract Act, 1987.

Sec. 32 of the Indian Contract Act, 1987 deals with the contingent contracts to do or not to do anything if an uncertain future event happens, cannot be enforced by law unless and until that event has happened. If the event becomes impossible, such contracts become void.

Section 56 deals with the doctrine of frustration as being acts that cannot be performed. Under this doctrine a promisor is relieved of any liability under a contract in the event of the breach of contract and contract will be deemed to be void.

Section 56 is based on the maxim “les non cogit ad impossibilia” which means that the law cannot compel a man to do what he cannot possibly perform. The basis of the doctrine of frustration was explained by Supreme Court in the case of Satyabrata Ghose v. Mugneeram in which Justice Mukherjee held that the basic idea upon which doctrine of frustration is based is that of the impossibility of performance of the contract and the expression frustration and impossibility can also be used as synonyms.

Generally where the contractual parties have not kept the clause pertaining to Force Majeure, the relief under Sec. 56 of the Indian Contract Act, 1987 can be claimed by the affected party.

Force Majeure clause is a provision in any contract that excuses a party from not performing its contractual obligations that become impossible or impracticable, due to an event or effect that the parties could not have anticipated or controlled. The occurrence of such an event protects a party from liability for its failure of contractual performance. Force Majeure is generally considered as an Act of God. The events such as natural disaster, the outbreak of diseases, war situation, strikes, political events, government directions, epidemics, pandemics and or of like natural events which are beyond the control of any contractual parties and resulting to which the performance becomes impossible and such non-performance of any contractual obligation does not tantamount the breach of contract.

Today except for necessary supplies, every businessman is abode by lockdown directions of Government of India and in this circumstances, one can easily identify the quantum of disputes and litigation in trade once business resumes considering the fact that today almost every service providers, supplier, lessee, employer would have failed to perform on the basis of his agreed contractual obligations and the primary cause for such underperformance or nonperformance of such obligation is due to the outbreak of this pandemic but on the contrary several contractual parties for the sake of avoiding any legal consequences have already started using this as a legitimate grounds for their default.

Drafting of Contract & its Implications

While drafting any commercial contract, the occurrence of any unascertained events should not be ignored and force majeure events are required to be provided expressively since this cannot be considered implied under Indian Contract Act, 1987 and in the event of any breach on such grounds the language used in the Contract plays a dominant role before the court of law for both the contractual parties.

This pandemic would have never been in thought of any contractual parties and its inclusion in any commercial contact is a rare possible thing and in such circumstances, the rule of ejusdem generis prevails which mean where a general term follows a specific one, the general term is required to be construed to encompass only those events which are similar in nature to the events covered unspecific words and in this regards the falling of COVID-19 pandemic in force majeure events is purely based on the language of the contract and in this regards whether a party can be excused for its non-performance is very much based on terms of a contract but the onus will always be on the part of one who has failed to perform meaning thereby the party who is asserting force majeure defense is required to establish this fact i.e. to show the reasonableness of his non-fulfillment of performance obligations just due to this corona outbreak and it can never be claimed ex-post facto.

But if the pandemic is included in the force majeure events in any contract and this COVID-19 outbreak would certainly trigger a force majeure clause in the contract and this can also be invoked it this hard time. This clause requires the party to promptly notify this fact to its counterpart prior to avail any relief out of it.

Remedies to the Parties

Upon happening of Force Majeure event, the language of the clause ultimately determines the manner in which the contracting parties are proposed to handle it and the parties are bound to act in the manner provided in the contract. The contract may either provide for the termination of contract or suspension of contract for the time being until the event gets prolong. Post-Lockdown Phase There is a certain possibility that many of the business enterprises will deliberately take the advantage of COVID-19 outbreak as a reason or their nonperformance of payment obligation but then the need is that to demonstrate that how their business has been disrupted by this pandemic and their excuse should not be so generic.

COVID-19 has proved the importance and benefit of well-drafted contractual documents considering the fact that the Force Majeure clause of every contract defines some compliance obligations i.e. obligation to issue a notice to counterpart and abundance of evidence how the ability of the performing party has been impacted to perform his obligations. 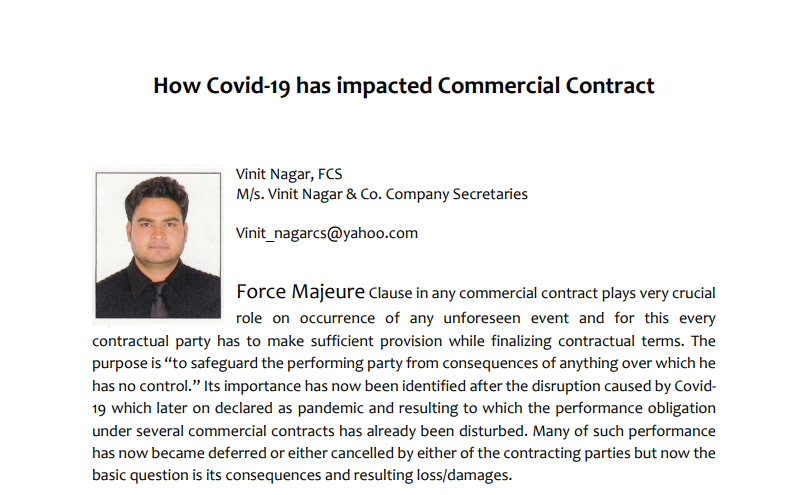 Extension of curfew, on movement of Individuals (except for essential activities/services as already stipulated in DDMA Order No. 381 and 397) in the territory of NCT of Delhi, till 5AM on 17.05.2021: DDMA.

List Of Medical Oxygen Suppliers For Home Use: AIIGMA

Advisory for Extension of Validity of Documents till 31 March 2021

Removal of Pendency of Registration Application Filed During COVID Period

How to manage a perfect WFH during Corona Lockdown?

The frustration of the contract under section 56 as the agreement has become impossible to perform should be appropriately invoked.

Crisis ahead for NBFC

Construction is allowed in some govt projects

FAQs on CSR: Bad News for Indian Inc. if donation made to CM Relief Fund

Strict action for not following the COVID-19 instructions

Immediate relief to taxpayers by releasing of pending refunds

Bail allowed due to Corona woes


GST implications for partnership firm Having Company as its one Partner