‘Adani Gas Limited’ (AGL) has preferred the instant appeal being appeal No. TA (AT) (Competition) No. 33 of 2017, Old Appeal No. 50 of 2014 against the order dated 3rd July 2014 passed by the Competition Commission of India (Commission) in Case No. 71 of 2012 (Faridabad Industries Association Vs. Adani Gas Limited) under Section 27 of ‘the Competition Act, 2002’ (Act) holding that the Appellant has contravened the provisions of Section 4(2)(a)(i) of the Act by imposing unfair conditions upon the buyers under ‘Gas Supply Agreement’ (GSA). The Commission, apart from directing the Appellant to cease and desist from indulging in conduct found to be in contravention of the provisions of the Act in terms of the impugned order, directed the Appellant to modify the GSA’s in the light of observations and findings recorded in the impugned order and imposed a penalty @ 4% of the average turnover of the last three years quantified at Rs.2567.2764 Lakh.

Observations of the Tribunal:

On a plain reading of the provision engrafted in Section 27 of the Act, it emerges that contravention of Section 3 or Section 4 of the Act being established, the Commission is empowered to pass all or any of the orders envisaged under Clauses (a) to (g). The language of this provision leaves no scope for doubt that the Commission may, befitting the circumstances of a case, pass any order falling under either one or more of the Clauses in combination or even encompassing all the Clauses. The term ‘any’ has to be accorded a purposive and a creative interpretation which can be explained on no hypothesis other than the one that it embraces one, more than one, some, any and all. In ‘Shri Balaganesan Metals Vs. M N Shanmugham Chetty & Ors.’, reported in (1987) 2 SCC 707, the Hon’ble Apex Court interpreted the term ‘any’ to mean ‘some’, ‘one of many’ and ‘an indiscriminate number’. Again in ‘Excel Crop Care Ltd. Vs. Competition Commission of India & Anr.’, reported in (2017) 8 SCC 47, the term ‘any’ was interpreted to mean ‘all’, ‘every’, ‘some’ or ‘one’ based on the context and subject matter of the statue. It is abundantly clear that the term ‘any’ is all-encompassing and empowers the Commission to pass orders either singularly (such as to desist, discontinue and not reenter) or coupled with any other discretion (such as the imposition of penalty and/ or modification of the impugned agreement) or pass all orders under Section 27 of the Act.

The Commission held AGL guilty of contravention of provisions of Section 4(2)(a)(i) of the Act by imposing unfair conditions upon the Buyers under GSA. As regards Clause 13 (Billing and Payment), the Commission was of the view that the terms and conditions under this Clause providing that an excess payment by the Buyer to the Seller due to erroneous billing/ invoicing on the part of Seller gives rise to no liability whatsoever on the part of the Seller including interest whereas a delayed payment by the Buyer renders him liable to pay interest. The Commission was of the opinion that there is no obligation on the part of AGL to pay interest in terms of Clause 13.7, such clause imposed unfair conditions upon the Buyers. Further, Sub-clause 13.5 also imposed an unfair condition upon the Buyers in as much as the interest rate was left to be determined by the Seller and communicated in the future. As regards Clause 17.2 and 17.4, the Commission was of the view that the conditions providing for a short duration of only 45 days for the Industrial Consumers as against longer duration available to AGL from GAIL for meeting the cumulative DCQ Obligation on account of failure to take off with termination clause amount to the imposition of unfair conditions. As regards Clause 16.3 of GSA, dealing with force majeure, Commission found that the clause vesting discretion in AGL to accept or reject the request of customers for force majeure amounts to imposition of unfair conditions. As regards Sub-clause 11.2.1 of GSA, the Commission found it imposing unfair conditions to the extent the consumer is obliged to meet its MGO payment obligation even in the event of emergency shutdown calling for complete or partial off-take of gas.

To take care of this contravening conduct in the context of Clauses found to be offending, violative and abusive of the dominant position in the form of imposing unfair conditions upon Industrial Consumers and in the light of observations of this Appellate Tribunal adumbrated hereinabove, as also taking care of other reservations expressed by the FIA in their cross-appeal, the AGL proposed the revision in the relevant clauses of GSA as noticed in para 29 above, which reasonably take care of all objections and reservations as regards the contravening clauses bringing it within the fold of acceptable conduct and safeguarding the concerns and legitimate interests of Industrial Consumers.

Finally, we are left to deal with the application of Section 27 Clause (b) which provides for the imposition of penalty upon the enterprise found guilty of abuse of dominant position viz. AGL in the instant case. The imposition of penalty for abuse of dominant position by an enterprise is left to the discretion of the Commission with the rider that such penalty shall not exceed 10% of the average of the turnover for the last three preceding financial years upon such person(s) or enterprises which are parties to the contravening agreements or abuse of dominant position. The phraseology employed in the provision clearly brings it to fore that while there is a ceiling on the maximum penalty sought to be imposed upon the enterprise found guilty of abuse of dominant position in the relevant market, no restriction as regards minimum has been prescribed. The discretion with the Commission in imposing penalty lies within the aforesaid delineated bounds. It is well settled by now that judicial discretion connotes exercise of judgment by a judicial or quasi-judicial authority based on what is fair under the circumstances and guided by the principles of law. There is no hard and fast rule and an actual exercise of judgment on consideration of the peculiar facts and circumstances of the case is required. It is also settled by now that the affected party is not entitled to claim the exercise of discretion in its favor as a matter of right [refer ‘Aero Traders (P) Ltd. Vs. Ravinder Kumar Suri’, Reported in (2004) 8 SCC 307]. However, it is entitled to show that there are mitigating factors/ extenuating circumstances warranting the imposition of lesser/ reduced penalty.

The Commission while imposing penalty noticed that only a few clauses out of the GSA have been found to be in contravention of the provisions of the Act. It also noticed the changes effected by AGL during the investigation and pendency of proceedings before the Commission in the agreements (GSAs). Having regard to the same, it decided to impose penalty @ 4% of the average turnover of AGL for financial years 2009-10, 2010-11 and 2011-12 worked out at Rs.2567.2764 Lakhs. Some more development took place during the pendency of appeals before this Appellate Tribunal to which we have alluded to earlier. The Gas Supply Agreements (GSAs) that had been revised by AGL during the course of investigation and inquiry before the Commission came up for further revision of the contravening clauses to make them more consumer-friendly and to protect the interests of Industrial Consumers by removing the disparity as regards the revision of gas prices, payment obligation in case of shutdown of supply and for complete or partial off-take of gas, etc. which came about in compliance to the suggestions put forth by this Appellate Tribunal. Such modifications which in effect eliminated discrimination qua Industrial Consumers and the subsequent emergence of competitors of natural gas on the scene coupled with the fact that AGL not only came up with a voluntary revision of GSAs even before the conclusion of inquiry by the Commission and was amenable to the advice/ suggestions falling from this Appellate Tribunal resulting in the incorporation of the consumer-friendly clauses substituting the contravening provisions in the GSAs, in our considered opinion carve out mitigating factors/ extenuating circumstances in favor of AGL outweighing the only aggravating factor i.e. abuse of dominant position. Keeping that in view we are of the considered opinion that reducing the penalty imposed on AGL from 4% of the average annual turnover of the relevant three years to 1% would be commensurate with and proportionate to the level of proved abusive conduct of AGL. We are of the firm opinion that this reduction would meet the ends of justice and achieve the desired object of the statue in the peculiar facts and circumstances of the case.

Both the appeals are accordingly disposed of upholding the impugned order passed by the Commission holding AGL guilty of abuse of dominant position with the orders and directions passed by the Commission with modification in the imposition of penalty on AGL as indicated hereinabove. The Balance amount of the penalty as reduced be deposited by AGL within thirty days of the pronouncement of this judgment. All other orders/directions given by the Commission shall remain intact. The revised agreement (GSA) as approved by us shall be made operational with immediate effect. 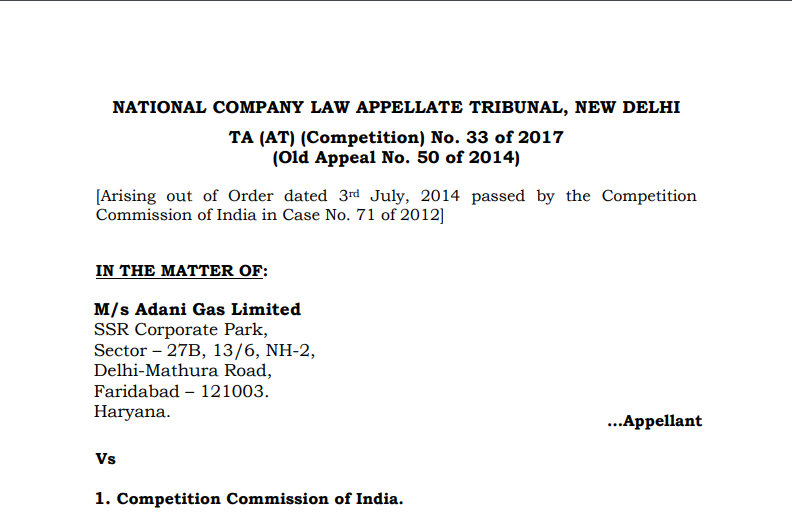 Tagged with: NCLAT confirms Penalty on Adani Gas for Abuse of Dominant Position

Merger of various Banks in India with effect from 1st April, 2020.