There are always certain reasons while opting for the registration of the Company as a Public Limited Company which might be either with a view to accepting deposit from public or in order to raise public fund by the way of issue of securities wherein the possibilities of generating the fund is high without having any restrictions in terms of limitations with regards to the total number of its shareholders alongside there also exists some conditions which require promoters to opt for the registration of Public Company and these terms & conditions are pre-existing i.e. for participating in the bidding process while applying for any tender or condition imposed by a financial partner but after such registration, these companies are considered as Company of Public wherein the level of accountability, answerability, disclosure obligations, transparency, the appointment of non-executive directors, mandatory committee constitution under the chairmanship of independent director, etc. These responsibilities rise up even though when even no public money might have been accepted & utilized by that moment and regulator also used to consider these companies from a different viewpoint and their surveillance over there companies are very stringent.

The registration of Public Limited Company with some reasons & vision is always justified but at the same time such promoters should also understand that even if they carry on the business operations as Private Limited Company, the options are always open and available with them to convert their Company into Public in future at any point in time, whenever the same is so desired and principally when the situation mandates such conversion but till that moment it is always advisable and advantageous to carry on the operations as Private Limited Company especially when the company is actually a closely held and not carrying on its business with public funding.

The Ministry of Corporate Affairs with a view to bringing transparency in the Company’s affairs and in order to protect the interest of stakeholders keep on emphasizing on several reporting and disclosure requirements by bringing several notifications, office orders, circulars, clarifications by amending the Act and Rules framed thereunder and majority of such compliance burden falls on Public Limited Companies considering the quantum of involvement of Public interest. On the contrary, it is also found that the Government is flexible and generous towards Start-ups & encouraged them to carry their business as Limited Liability Partnership or Private Limited Companies by bringing so many flexibilities and exemptions in terms of compliances from the provisions of the Act considering the complete absence the direct public money in such LLP’s & Companies. There are several provisions under the Companies Act which also allows Private Limited Companies to frame its own modus operandi by altering its charter documents i.e. Article of Association. This flexibility is just with a view to promoting ease of doing business and more particularly for closely held Company. But no flexibilities should be expected by such entities who are funded by other than Company’s kith & kin.

The Companies Act, 2013 confers so many privileges & exemptions to the Private Limited Companies those which are not subsidiary of Public Company and these privileges shall cease to give any benefits when such companies get converted into Public or when they became a subsidiary of Public Company. The only reason the Government has exempt such companies is because of the complete absence of involvement of public interest in comparison to the Public Limited Companies. The Central Government is empowered u/s 462(1) of the Companies Act, 2013 to issue by the way of a notification, directing that any of the provisions of the Companies Act shall not apply to such class of Companies or shall apply to such class of companies with such exceptions, modifications, and adaptions and in this regard, the liberties conferred upon the Private Limited Companies are discussed below.

II. The Article of Association of Private Limited Companies can provide that Sec. 43 and Sec. 47 of the Companies Act, 2013 shall not apply to such Companies.

IV. The requirement of an Ordinary Resolution in place of Special Resolution for the offering of further shares to employees under a scheme of Employees’ Stock Option. [Sec. 62(1)(b)].

V. No restrictions with regards to the quantum of deposit to be accepted from members of the Company subject to the fulfilments of certain conditions. Rule 3 of the Companies (Acceptance of Deposit) Rules, 2014.

VI. Non-applicability of certain conditions for acceptance of deposit from members like the circulation of DPT-1 and its filling with Registrar, Deposit Repayment Reserve Account, etc. [Sec. 73(2)(a) to (e)].

VII. The Article of Association of Private Limited Company is having the flexibility to provide otherwise with regards to the provisions of the General Meeting like Circulation of Notice calling General Meeting, Explanatory statement, quorum, Chairman, Proxy, restrictions on voting Rights, Show of hands, and Demand for Poll. (Sec. 101 to Sec. 109). Article of Private Limited Companies may have specific Provision with respect to these sections. Private Companies are not required to file MGT-14 with Registrar of Companies for the resolutions passed in pursuance of Sec. 179(3) of the Companies Act, 2013.

VIII. The limit with regards to the Number of Statutory Audits by an Auditor wherein the Private Limited Company having paid-up share capital less than 100 Crore Rupees along with One Person Companies, Dormant Companies, and Small companies are excluded from the specified Limit u/s 141(3)(g) of the Companies Act, 2013. This can be considered as a
benefit for individual / Firm acting as a Statutory Auditor of such Companies.

IX. The Private Limited Company may by its Article provides for additional grounds of disqualifications i.e. in addition to those specified in sub-section (1) of (2) of Sec. 164 of the Companies Act, 2013.

X. The Private Limited Company may, by its articles, provide any other grounds of the vacations of the office of a director in addition to those specified in sub-section (1) of Sec.167 of the Companies Act, 2013.

XI. No prior approval of Shareholders are required in case if Private Limited Company intends to sell, lease, or otherwise dispose of the whole or substantially the whole of the undertaking of the Company. [Sec. 180(1)(a)]

XII. No limits with regards to borrowing, unlike Public Company where the Board of Directors are not allowed to borrow money in excess of paid-up share capital, free reserve, and premium without the prior approval of the Company’s Shareholders. [Sec. 180(1)(c)]

XIII. Interested Director may participate in such an agenda of the Board Meeting in which he/she is interested after Disclosure of his interest.

XIV. The Private Limited Companies are totally exempt from the requirements of Sec. 185 and are allowed to grant Loan, provide guarantee and create security to/ on behalf of its Directors & their relatives and partners, subject to the fulfillment of certain conditions.

XV. In the case of Private Limited Companies, the related party to any contract or any the arrangement can also vote on such resolution as a Member of the Company, which in case of Public Company, he/she is not allowed to do so.

XVI. The disqualification with regards to the appointment of any person as Managing Director, Whole-time Director, or Manager. [Sec. 196(4) & 196(5)].

XVII. Non-applicability with regards to the mandatory appointment of Key Managerial Personnel. [Sec. 203(1)].

XVIII. The limits with regards to Managerial Remuneration and prior approval of the Ministry of Corporate Affairs if the terms of appointment of managerial personnel are in variation from schedule V of the Companies Act, 2013. [Sec. 197(1) & (3)].

XIX. In the case of Financial Statement with respect to the small company and private company in case of a start-up, it may not include Cash Flow Statement. [Sec. 2(40)].

The Companies (Prospectus and Allotment of Securities) Third Amendment Rules, 2018 mandates every unlisted public company to issue the securities only in dematerialized form and facilitate the dematerialization of all its existing securities in accordance with provisions of the Depositories Act, 1996. Through this amendment, every unlisted public company making an offer for the issue of any securities or propose buyback of securities or issue of bonus shares or rights offer shall ensure that before making such offer, that the entire holding of securities of its promoters, directors, key managerial personnel has been dematerialized in accordance with provisions of the Depositories Act 1996 and regulations made thereunder.

Surely this will overcome all the drawbacks and hitches with regards to the holding of securities in physical mode but alongside this is now considered to be the recurring cost on such Public companies especially those which are operating in the model of Public Company with only minimum shareholders.

Cost & Compliance can still be minimized through Conversion

The Board of Directors are entitled to make an application under the second proviso to sub-section (1) of section 14 of the Act for the conversion of a public company into a private company before the Regional Director which shall be subject to the approval of Shareholders and after due consideration of the interest of the Creditors. The Directors of such Companies are mandatorily required to give a declaration that the company has already limited its number of its members up to two hundred and that no deposit has been accepted by the company in violation of the Companies Act and rules made thereunder. It is also required to be identified that no non-compliance of sections 73 to 76A, 177, 178, 185, 186, and 188 of the Act shall be subsisting at the time of conversion and declaration of the said effect is required to be made before the Hon. Directorate.

These companies are also required to give Public Notice in the newspaper prior to the filing of the application for conversion with a view to inform and invite objection from its stakeholders prior to conversion so that the same shall also be considered by the Regional Director while sanctioning conversion. In order to consider creditors interest, the Company is also required to serve, by registered post an individual notice to each creditor of the company and notice of the proposed conversion is required to be given to the Registrar of Companies and thereupon based on the report of the Registrar of Companies and representation, if any, received from any stakeholder in response to the advertisement, the same may be put up for orders by the Regional Director

It has been observed that many of the Promoters define and differentiate Private Limited and Public Limited Companies by themselves and believes that Public Limited Company will give them far-reaching benefits and thereby completely ignore the very fact that selection of the type of entity also, make a huge difference in their operations and obligations. There exist several blue-chip Companies operating under the banner of Private Limited Company even in the big groups like Reliance and Tata’s having billion of turnover.

“Sometimes suffix “Limited” is too costly if the same has been opted to shorten the Company’s name.” 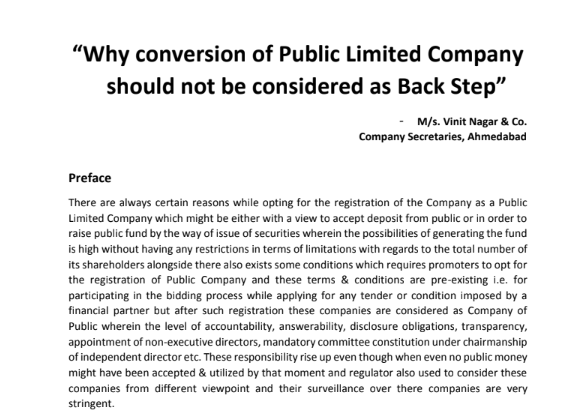