COVID-19 if taken positive then this Circular dated 30th March 2020 from the Ministry of Corporate Affairs must be the first one to note down on a plain paper especially by every Defaulting Companies and those Companies whose name has been struck off by the Registrar of Companies due to non-filing of Financial Statements and Annual Returns of its preceding years and Promoter of whose are willing to opt their Company’s name to restore back on the records of the Registrar. Also the happy are those whose appeal for the restoration of their Company’s name is pending before the National Company Law Tribunal. Through this Circular many of such Defaulting Companies have already saved a lot of money which otherwise would have been spent in terms of additional filling fee since with this scheme such companies have got their final chance to either clean their dirty slate to write fresh-one over it or else to register as dormant entity and to opt for its closure if after certain years the economic situation does not assist them to spring up their operations.

The Nationwide lockdown caused due to the COVID-19 outbreak has also blessed those defaulting Companies who have defaulted in the filing of statutory documents & return in those years when COVID-19 was nowhere not even in Google. In order to give an opportunity to the defaulting companies by enabling them to file its belated documents in MCA-21 registry, The Ministry of Corporate Affairs has introduced Companies Fresh Start Scheme- 2020 condoning the delay in filling with Registrar and specified Moratorium Period i.e. from 1st April 2020 to 30th September 2020 during which no additional filing fees shall be charged for late filing of a specified overdue document, return, and statement etc. of earlier years irrespective of its due dates. There are several event-based and annual compliances based forms under the Companies Act from which no companies are exempt and non-filling of such documents and return on time attract additional filing fee, penalties, prosecution, adjudication, and many a times inquiries may also be initiated against such companies which may result to inspection and investigation but this scheme has compressed many of such consequences.

The Scheme shall not give its benefit to such Companies which have amalgamated under a scheme of arrangement or compromise under the Act and where pursuant to Sec. 232(5) of the Companies Act, 2013 such company are required to cause a certified copy of the order to be filed with the Registrar for registration by filling Form INC-28 within thirty days of the receipt of certified copy of the order.

Benefits of availing Scheme on Time

The Scheme applies to all the defaulting companies irrespective of its type i.e. Private Company, One Person Company, Public Company, Sec. 8 Company, Nidhi Company or Producer Company which has defaulted in filing of any of the specified documents, returns, statement, etc. on time on the MCA-21 registry including annual statutory documents. This Scheme has come up with following advantages and immunities, such as:

Every defaulting companies after filling of all its overdue documents and returns within the time frame provided under this Scheme shall apply to the Registrar of Companies in Form CFSS-2020 to get Immunity Certificate but such application is required to be made within the expiry of six months from the date of closure of the Scheme. This certificate shall immune Company & its officer in default from the launch of prosecution or proceedings for imposing the penalty on companies with respect to the filling of belated documents.

The Company is also required to declare at the time of making an application for Immunity Certificate that no petition or appeal was filed against any notice issued or complain filled before any Court or NCLT or NCLAT or RD or any other adjudicating authority for violation of the provision of the Act in respect of form/ documents specified in form CFSS and if any petition or appeal was made then the same has been withdrawn and the proof of withdrawal of appeal is required to be attached.

The immunity shall be granted from the launch of prosecution or proceedings and the same shall be provided only to the extent such prosecution or the proceedings pertains to any delay associated with filling of belated documents in the registry and no Company or its officers shall get immune from their past wrong doings and misdeeds or any other noncompliance committed under the Act such as non-calling of an AGM before due date, misstatement in annual return, misapplication of fund raised through allotment of securities or appoint of KMP in violation of Sec. 197 or schedule V of the Act, appointment of Director by wrongful means etc. Hence the Stakeholders/ Investors whose interest have been damaged or competent authority can initiate the needful actions against such non-compliances committed under the Act.

The immunity shall not be applicable in the matter of any appeal pending before the court of law and in case of management disputes pending before Court or Tribunal. No immunity shall be provided in case any court has ordered conviction in any matter, or an order imposing penalty has been passed by the ROC under the Act, and no appeal has been preferred against such order the Court or ROC, as the case may, before the scheme has come into force.

This Scheme gives an additional time limit of 120 days for filing of an appeal before the Regional Director u/s. 454(6) of the Companies Act, 2013 where the due date for filing of an appeal against the order of adjudicating authority imposing the penalty in respect of non-compliance of belated documents filed under the subjected scheme has fall between the period of 01st March 2020 to 31st May 2020.

Some Wrong Doers can’t be Immune

This lockdown phase which in no case shall come in anyone’s life once this pandemics gets settled & get out of news. This is a perfect time to utilize professionally, personally and to strengthen the bond within a family members. Likewise the defaulting Companies have got their first & last change to file all their overdue returns and forms and have a fresh start with updated Compliances on its Slate.

This scheme should also be considered as a caution notice for such defaulting companies wherein such Companies are allowed to avail any of the alternatives provided under the Scheme i.e. to file all those overdue documents and returns with nominal fee irrespective of its due date, or else to register defaulting inactive company as Dormant Company which enables such companies to remain on the records of Registrar with minimal compliance formalities or such companies are also permitted to apply voluntarily u/s 248(2) for striking off its name from the records of Registrar, in case of failure to opt for any of these alternatives by such defaulting Companies, the Registrar of Companies shall take all the necessary actions under the Act against such Companies, their present and past officers and no immunity shall be granted thereafter. 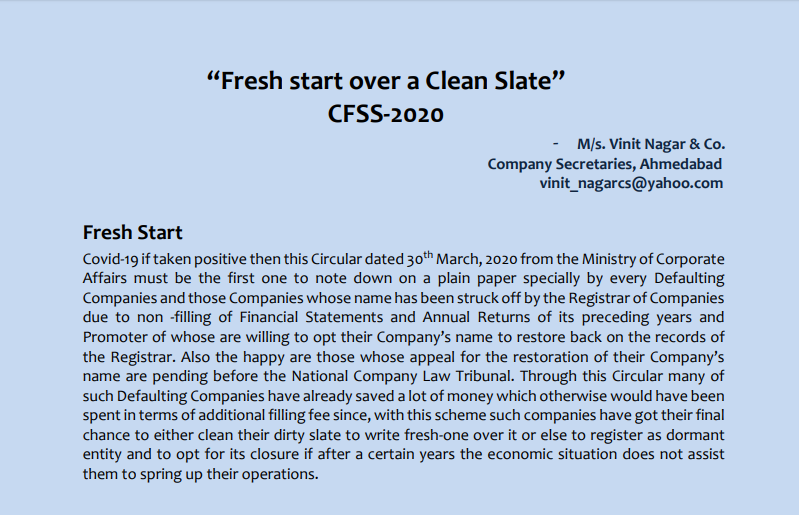