The Ministry of Corporate Affairs (MCA) has come out with Companies (Audit and Auditors) Second Amendment Rules, 2017 (‘Amendment Rules’) vide Notification dated 22nd June 2017. In the aforesaid notification, MCA has amended Rule 5 (b) of Companies (Audit and Auditors) Rules, 2014 (‘Rules’). This amendment gives relief to private companies with paid-up share capital of below Rupees fifty crores, from the applicability of rotation of auditors for private companies under section 139 (2) of the Companies Act, 2013.

Provided also that every company, existing on or before the commencement of this Act which is required to comply with the provisions of this subsection, shall comply with requirements of this subsection within a period which shall not be later than the date of the first annual general meeting of the
company held, within the period specified under sub-section (1) of section 96, after three years from the date of commencement of this Act.

Thus, other provisions of section 139 (2) of the Act and the Rules remaining the same, the amendment rules have increased the threshold for the applicability of rotation of auditors based on the paid-up share capital of private companies from Rs. 20 crores to Rs. 50 crores. 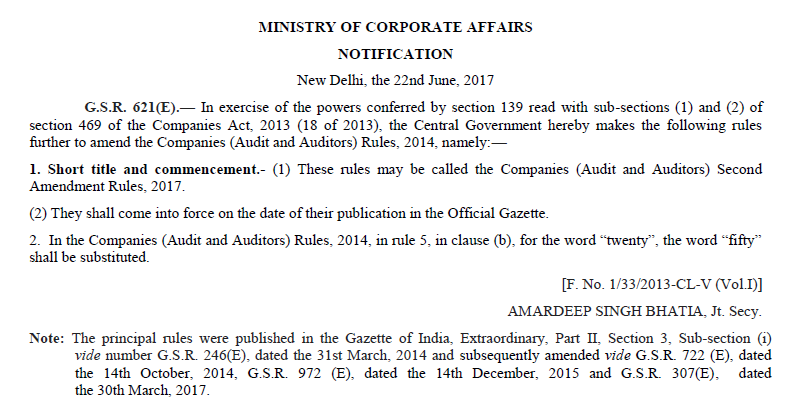