Adjudication of Penalties under the Companies Act, 2013

“Adjudication of Penalties under the Companies Act, 2013”

The Companies (Amendment) Act, 2019 has already re-categorized several offenses under the Act in the category of compoundable offenses to an in-house adjudication framework. Now, these offenses are presently punishable with the penalty, instead of being punishable with fine or imprisonment or with both.

With regards to the Companies (Amendment) Bill, 2020, which has proposed several amendments to the Companies Act, 2013, by decriminalizing various offenses and moderating the penalty regime to boost of ease doing business in-country. The majority of the changes are proposed with a view to removing criminality of the offenses where no mala fide is intended. The major thrust is to improve the business and to de-criminalize the Act. The Center is set to move a Bill to amend the Companies Act 2013 in the current session of Parliament. The Bill will decriminalize offenses which will be classified as civil wrongs not warranting jail.

“Decriminalization” is to the lessening of the criminal penalties in relation to certain acts which will further reduce the number of compoundable offenses under the Act.

“Fines” are mostly used in the context of criminal law wherein a Court of law or Tribunal can punish a Company and its officer convicted of a crime by imposing a fine or imprisonment whereas the “Penalty” is generally a punishment imposed for breaking a law, rule, or contract and this can be imposed by the Registrar of Companies.

Related Topic:
Quantum of Penalty – How And When – Whether Mens Rea Is One of The Essential Ingredient.

Power of adjudication – the Registrar of Companies

(a) summon and enforce the attendance of any person acquainted with the facts of the case;

(b) To order for evidence or to produce any document which is relevant to the subject matter.

The Registrar before adjudging any penalty under the Companies Act is required to issue a written notice to the company, the officer who is in default or any other person, as the case may be, to show cause within such period as may be specified in the notice which in no case shall be less than 15 days and more than 30 days from the date of service thereon that, why the penalty should not be imposed on it or him or them.

Every notice issued shall indicate the nature of non-compliance/ default committed under the Act and attention shall also be drawn to the relevant penal provisions of the Act along with the maximum penalty which can be imposed on the parties’ concern.

The reply to such notice shall be filed in electronic mode only within the period as specified in the notice.

On the date fixed for hearing and after giving a reasonable opportunity of being heard to the person concerned, the adjudicating officer may, subject to reasons to be recorded in writing, pass any order in writing as he thinks fit including as order for adjournment.

The adjudicating officer may require the concerned person to submit the written submission on certain other issues related to the notice which are relevant for the determination of the default.

The adjudicating officer shall pass an order thereafter and shall send a copy of the order passed by him to the concerned company, the officer who is in default or any other person or all of them. In no case, the penalty imposed shall be less than the minimum penalty prescribed, if any, under the relevant section of the Act.

The imposed penalty shall be paid through MCA Portal and all the sums realized by way of penalties under the Act shall be credited to the Consolidated Fund of India.

Elements to be considered while Adjudication

While adjudging the quantum of penalty, the adjudicating officer shall have due regard to the factors such as:-

(a) Size of the company in terms of capital, revenue, profit, etc.

(b) Nature of business carried on by the company;

(e) Repetition of the default;

(f) Disproportionate gain as a result of the default;

An appeal before the Regional Director

An appeal against the order of the adjudicating officer shall be filed in writing by the aggrieved party in Form ADJ (Memorandum of Appeal) with the Regional Director having jurisdiction in the matter within a period of 60 days from the date of receipt of the order setting forth the grounds of appeal and the appeal shall be accompanied with the certified copy of the order against which the appeal is sought and authority letter/ Board Resolution in favor of Counsel and his Memorandum of Appearance if the appellant is representing through any Counsel.

On the receipt of an appeal, office of the Regional Director shall endorse the date on such appeal and shall sign such endorsement. If on scrutiny, the appeal is found to be in order, it shall be duly registered and given a serial number.

Hearing before the Directorate

On the date fixed for hearing the Regional Director may, subject to the reasons to be recorded in writing, pass any order as he thinks fit including an order for adjournment of the hearing to a future date.

In case the appellant or the adjudicating officer does not appear on the date fixed for hearing, the Regional Director may dispose of the appeal ex-parte.

Restoration of Appeal after disposal

The certified copy of every order passed by the Regional Director shall be communicated to the adjudicating officer and to the appellant forthwith and to the Central Government.

In the years to come the Ministry of Corporate Affairs is also looking forward to having a system of e-adjudication where there will be no provision of any physical interface before the Adjudicating Authority. The system generated show cause notices shall be served to the Company and its Officer concerned against which their representation shall also be sought through the electronic means only and automatically the Web Portal will calculate the penalty which is to be imposed on the Company and the officer concerned which is in default or to any other person, as the case may be just like the “Traffic Memo”. 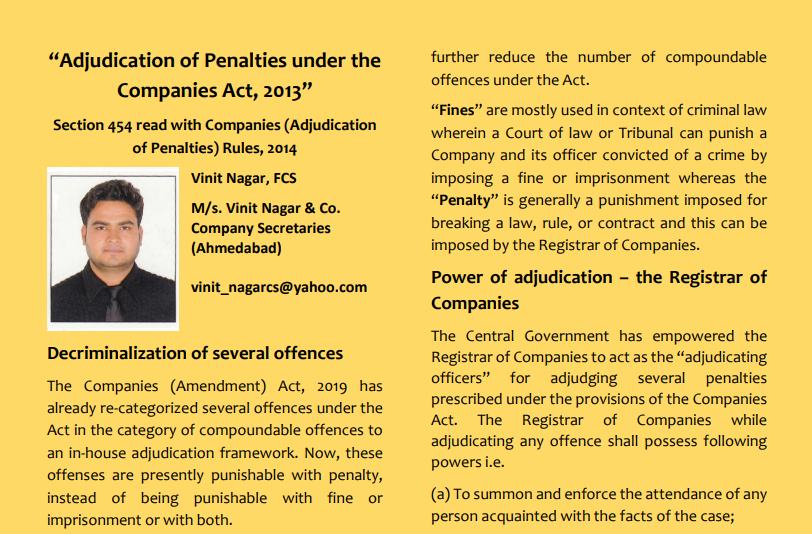 
export of goods and services