Petitioner is of the view that transaction entered into by Petitioner with the foreign customer is one of export of service from India.

Para 80- Whether law or a provision is unconstitutional or not, has to be decided by the Court on the touch-stone of the Constitution

Judicial Principles as laid down by Apex Court has been considered

– Section 5 of the IGST Act is the charging section

Secondly, clause (5) (which not being bound by the Explanation to clause (1) of Article 269A), empowers the Parliament to legislate on principles for determining the place of supply and when the supply would be in the course of inter-state trade or commerce

Para 105- Section 8 deals with the nature of supply and Section 13 deals with a place of supply. Both the provisions have different purposes

Once the Parliament has in its wisdom stipulated the place of supply in case of Intermediary Services be the location of the supplier of service, no fault can be found with the provision by artificially attempting to link it with another provision to demonstrate constitutional or legislative infraction.

When there is a specific provision defining Intermediary as contained in section 2(13) of the IGST Act and Intermediary Services are specifically dealt with in section 13(8)(b), the question of application of a general provision would not arise, particularly when the constitutionality of both the above provisions has been upheld.

Newly amended Article 286 (2) pursuant to the Constitution (101st) Amendment Act, 2016 that the Parliament can formulate principles for determining when a supply of goods or services or both have taken place either outside the State or in the course of import into or export out of the territory of India.

The whole purpose of Article 286(2) is to empower the Parliament to formulate principles to determine the situs of supply. This is also stated in Article 269A(5)

Powers under Article 246A, 269A, and 286 of the Constitution of India, the Parliament by legislation, in Sections 7 (inter-State supply) and 8 (Intra-State supply) of the IGST Act has provided for determination of the nature of supply and in Sections 10 to 14 for a place of supply

Whether the Parliament is empowered to enact laws in respect of extra-territorial aspects or causes that have no nexus with India.

A hypothetical situation in respect of which this new challenge seems to be taken up is not the case of the petitioner. It has been clearly stated in paragraph 4.6 of the petition that the Indian purchaser i.e. the importer directly places a purchase order on the overseas customer for the supply of the goods and the goods are directly shipped by the overseas customer to the Indian purchaser. There is no discussion or factual submission that the Indian intermediary i.e. Petitioner is purportedly a commission agent to a supplier in Germany who is exporting goods to an importer in Singapore. In fact, the agreements, illustrative copy whereof has been annexed to the petition are only in respect of counterparty from Japan

It would, therefore, not be necessary for us to deal with this hypothetical situation to consider the challenge under Article 245 of the Constitution of India.

Para 107- Even if the supplier of services was located outside India in which case as per this provision the place of supply would be the location of the supplier i.e. outside India and would not be taxable in India; and there would be no question of extraterritorial legislation.

107.7. We are in complete agreement with the principles laid down by the Hon’ble Supreme Court in the case of GVK Industries (supra). However, having observed that this is not a case of extraterritorial legislation

Whether the levy of GST on intermediary services has resulted in a violation of Article 14?

Para 110- The intermediary services rendered by Petitioner are specifically provided as one of the services in addition to banking services and transport hiring services where the place of supply has been provided as the location of the supplier of services as per Section 13(8)(b) of the IGST Act.

Here, because of the intermediary, the export of goods is taking place from the overseas customer to the Indian importer, which is the transaction of import of goods for which the intermediary services have been provided by Petitioner. Therefore, between Petitioner and others, there is no discrimination. Section 13(8)(b) would not be hit by Article 14 on this ground

Whether the levy of GST on intermediary services has resulted in restriction in Right to Carry Business under Article 19(1)(g)?

Para 111- If the submission of Petitioner was to be considered, then any tax levied by the Central or State Government would be a restriction to carry on trade under Article 19(1)(g) of the Constitution of India.

A foreign exporter would set up a liaison office in India is a matter which is in the individual freedom of such an exporter subject of course to the other applicable laws.

Parliament has the power to legislate on the place of supply and on inter-state supply of goods and services pursuant to Article 269A read with Article 246A and Article 286 of the Constitution of India, by virtue of which the IGST Act and Section 13(8)(b) have been enacted.

Whether the levy of GST on intermediary services by Petitioner is contrary to the fundamental concept of GST as a destination-based consumption tax.

Para 112- The scheme of the GST law in India is taxation on supply. Concepts cannot be imposed upon clear, unambiguous Articles of the Constitution of India as well as the language in the provisions of the statute.

There are three methods of calculation of indirect taxes viz. specific duty, ad valorem tax, and value-added tax (VAT). GST uses the method of value-added tax of calculation which removes the cascading effect. GST is calculated on “value-added” and not the value of the goods or services; value addition is the value added to the raw materials and other things purchased by the producer which means that the cost of purchase inputs would be excluded. This method of levy of tax is intended to remove the cascading effect of tax on tax and profit on tax. Therefore the IGST Act in my view is not VAT but only calculated as VAT.

GST is a tax on the supply and not on sale. One of the elements of GST as mentioned is that the calculation of GST is like VAT, which is on the value addition to reducing the cascading effect of the various taxes thereby reducing the effective rate of indirect taxes. This is one of the three methods of calculation of indirect taxes, viz., specific duty, ad valorem tax, and value-added tax.

Petitioner relied on the decisions All India Federation of Tax Practitioners v. Union of India 2007 (7) STR 625- Held constitutional amendments introducing special provisions of Article 246A, Article 269A, and Article 279A, have brought in the new GST regime. It is also observed that the Constitutional Amendment bringing an end to the service tax regime has omitted Article 268A and Entry 92C (though the same was not notified).

Petitioner relied on Commissioner of Service Tax v. SGS India Pvt. Ltd. 2016 (34) STR 554 (Bom. Held that was also a decision under the service tax regime and would be distinguishable in view of the amendment to the Constitution bringing in the GST law. Also, it is observed that an appeal in the said matter is pending final adjudication before the Hon’ble Supreme Court.

When the Constitution has empowered the Parliament to formulate principles determining the place of supply, in my view, Section 13(8)(b) cannot be said to be ultra vires the charging section as Section 13(8)(b) does not violate the levy on the supply made by the intermediary, particularly in view of Section 7, which designates such supplies to be inter-State supplies. And which power to designate inter-State supply also comes from Articles 246A, 269A(1) read with 269A(5) as discussed earlier. In my view, Section 13(8)(b) does not and cannot deem an inter-State supply to be an intraState supply. When there is a specific provision for levy and collection of IGST, then, in my view, referring to the charging section of another Act is not called for or rather it would be irrelevant. Section 13(8)(b) of the IGST Act has been enacted pursuant to the powers under Article 269A(5) of the Constitution of India and in accordance with the scheme of the IGST Act by which IGST is levied on all inter-State supplies of goods and services.

There is a specific provision dealing with the case of Petitioner viz. Section 13 (8)(b) of the IGST Act, which has been enacted pursuant to the powers under Article 269A (5) of the Constitution of India, then also in my view the challenge appears to be without substance.

Whether the levy of GST on intermediary services leads to Double Taxation once on the Petitioner and then on the Indian purchaser of goods.

The first supply attracts Section 13 (8)(b) of the IGST Act. The second supply is liable to tax under the Customs Act, 1962, and the incidence of customs duty would be on the importer of goods and not on the intermediary service provider. Moreover, the principle is well settled that two taxes which are separate and distinct imposts on two different transactions/supplies is permissible as in law there is no overlapping.

Parliamentary Committees are external aids to construction to be used only when there is ambiguity in the statute. The law relating to reliance upon Reports of Parliamentary Standing Committees has been once again reiterated in the decision of the Constitution Bench of the Supreme Court in the case of Kalpana Mehta v. Union of India (2018) 7 SCC 1. 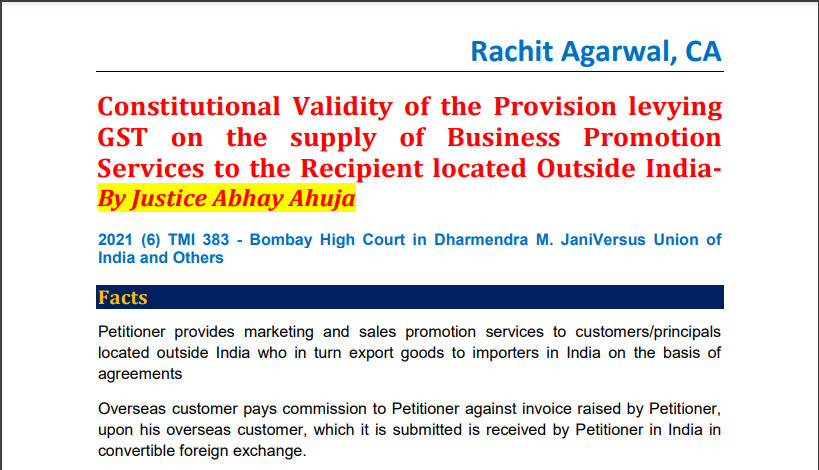 Bombay HC in the case of Dharmendra M. Jani Versus Union of India

Bombay HC in the case of Praful Nanji Satra Vs. State of Maharashtra

Bombay HC in the case of BA Continuum India Pvt. Ltd. Versus Union of India

Bombay HC in the case of GGS Infrastructure Private Limited

Bombay HC in the case of Shri. Girdhari Lal Lath Versus State of Maharashtra

Bombay HC in the case of Mr. Navneet Sahay Verma