Allahabad HC in the case of Nitin Verma Versus The state of U.P.

The state of U.P.

Learned counsel for the applicant has submitted that u/s 70 (1) of the Central Goods and Services Act, 2017, (hereinafter referred to as the ‘C.G.S.T. Act’), the proper officer has the power to summon a person whose attendance he considers necessary either to give evidence or to produce a document or any other thing in any inquiry in the same manner, as provided in the case of a civil court under the provisions of the Code of Civil Procedure, 1908. Section 70 (2) of the C.G.S.T. Act provides that every such inquiry referred to in sub-section (1) of Section 70 shall be deemed to be “judicial proceedings” within the meaning of Section 193 and Section 228 of the Indian Penal Code. He has submitted that the applicant has been summoned and he is ready to appear before the Proper Officer, C.G.S.T. Department, Agra to record his statement and to produce all documents but he is under the apprehension that when he goes for the same, he may be detained and sent to jail. The apprehension is covered u/s 41 (A) of Cr. P.C. The maximum punishment u/s 132 (1) (b) of the C.G.S.T. Act is 5 years. The applicant will cooperate with the inquiry but he will be definitely arrested and sent to jail. He will furnish reliable sureties, if granted anticipatory bail, as per the direction of this Court before the C.G.S.T. Department. He has been falsely implicated in this case on account of business rivalry on the allegation that he is running fake firms and from his possession, bogus invoices are alleged to have been recovered.

The judgement cited on behalf of the learned counsel for the department has not considered any of the relevant authorities on the point. Respondents had found from the documentary evidence that the company has collected service taxes for a number of years amounting to Rs. 4.80 crores but the same was not deposited. Therefore, the writ petition was dismissed. There was evidence of prior tax evasion against the petitioner. In the present case, there is no such allegation against the applicant. In that case, the petitioner was avoiding notice u/s 14 of the Central Excise Act, 1944, and was also having a proven record of tax evasion. Therefore, this Court rightly dismissed the writ petition filed praying for a direction to not to arrest the petitioner on his appearance before the Proper Officer in the inquiry for alleged evasion of service tax in violation of Section 89 (1) (ii) of the Finance Act, 1944 r/w Section 174 of the C.G.S.T. Act, 2017. In the judgement of the High Court for the State of Telangana, Hyderabad, relied upon by the learned counsel for the department, it was a case of regular bail and not anticipatory bail and the petitioner was already arrested.

The applicant, Nitin Verma, shall be enlarged on anticipatory bail for a period of six weeks or till the inquiry is concluded by the Proper Officer under Section 70 (1) of the C.G.S.T. Act, whichever is earlier, on the execution of a personal bond of Rs. 5,00,000/- and two sureties of the like amount before the Proper Officer concerned on the following conditions:-

(i) The applicant shall make himself available for interrogation by the proper officer as and when required;

(ii) The applicant shall not directly or indirectly, make any inducement, threat or promise to any person acquainted with the facts of the case so as to dissuade from disclosing such facts to the Court or to any officer;

(iii) The applicant shall not leave India without the previous permission of the Court and if he has a passport, the same shall be deposited by him before the proper officer concerned;

(iv) The party shall file a computer-generated copy of such order downloaded from the official website of High Court Allahabad;

(v) The concerned Authority/Official shall verify the authenticity of such computerized copy of the order from the official website of Allahabad High Court and shall make a declaration of such verification in writing.

(vi) In case the applicant fails to appear on any date fixed by the Proper Officer under the C.G.S.T. Act, for any reason whatsoever, this anticipatory bail application shall stand automatically rejected and the protection given to the applicant will cease to have any effect.

If any unforeseen circumstances arise, the Proper Officer would be at liberty to file an appropriate application before this Court for cancellation of anticipatory bail granted to the applicant.

The Proper Officer will continue with the inquiry and will not be affected by any observation made in this order. 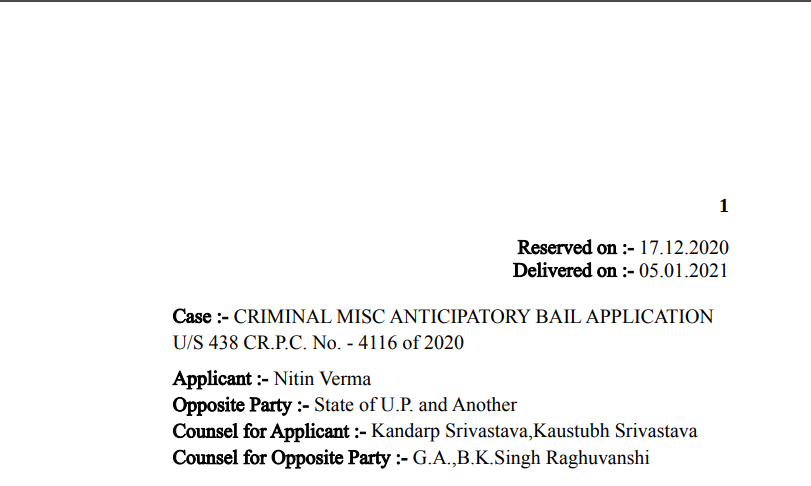 Allahabad HC Order in the case of M/s Jindal Pipes Limited Versus The State Of U.P.

Confiscation of Goods?- Books of Accounts could not be produced at the time of visit

Allahabad HC in the case of Bharat Forge Limited

Allahabad HC in the case of Ranchi Carrying Corporation Versus The State Of U.P.

Allahabad HC in the case of Aparna Purohit Versus The state of U.P.

Allahabad HC in the case of Anandeshwar Traders Versus State of U.P.

Allahabad HC in the case of M/s Torque Pharmaceuticals Pvt. Ltd. Versus Union Of India

Allahabad HC in the case of M/s Ratan Industries Limited

Allahabad HC in the case of M/s R.J. Exim Versus The Principal Commissioner