Allahabad HC in the case of Aparna Purohit Versus The state of U.P.

The state of U.P.

The allegation in the F.I.R lodged against the applicant and six other co-accused persons is that a web series is being shown on Amazon Prime Video, which is an online movie OTT platform, and on 16.01.2021, the movie part-1, “TANDAV” has been broadcasted. The web series is being shown through Amazon Prime Video through Head of India Originals, as paid movie. The movie has been directed by co-accused, Ali Abbas. The content of this movie is affecting the image of the police of the State of Uttar Pradesh adversely. In a Dial 100 police vehicle, two actors are shown travelling with open doors in a police uniform, consuming liquor and hurling abuses. The shooting has taken place in DistrictGautam Buddh Nagar. After witnessing part-1 of the movie, it is seen that the Hindu Gods and Goddesses have been depicted in a bad light with the intention of inciting communal sentiments. The post of Prime Minister has been depicted in a manner that will adversely affect the democratic system of the country. Caste and community-related utterances have been made deliberately so that they may affect public peace. Similarly, utterances have been made against the State police, public administration, and the constitutional posts so that the element of hate is developed between the communities and there are scenes that show disrespect for the scheduled castes. On account of the scenes and dialogues in the movie, social harmony and public peace is being adversely affected. All this has been deliberately done to make the web series controversial and gain publicity for the purpose of commercial gain. Hence, the F.I.R has been lodged against the producer/ director and actors/actresses of the movie series.

For constituting offense u/s 295-A I.P.C., there should be the deliberate and malicious intention of outraging the religious feelings of any class of citizens of the country. The aforesaid scenes show that the scenes have been made, intentionally using the names of Hindu Gods and sage to convey an insidious message. The allegations for committing offenses u/s 153-A(b) I.P.C. is fully made out since the act of the applicant is prejudicial to the maintenance of harmony between different religious, social, and communal groups and would affect public peace and tranquility. A perusal of the contents of the dialogues in the above-noted scenes would show that the offenses under Sections 505(1)(b) I.P.C. and 505(2) I.P.C. are fully made out. On the one hand, the sentiments of the majority community have been hurt by the display of the characters of their faith in a disrespectful manner, and on the other hand, an attempt has been made to widen the gap between the higher castes and the scheduled castes when the object of the State is to bridge the gap between the different castes and communities and make the country a united force socially, communally and politically.

It has come to the notice of this Court that the applicant has filed another anticipatory bail application being Criminal Misc. Anticipatory Bail Application U/S 438 Cr. P.C. No. 1794 of 2021 before this Court with regard to another such F.I.R lodged at P.S.- Hazratganj, Lucknow. She was granted interim protection from arrest by the order dated 11.02.2021 by a co-ordinate Bench, but she was not cooperating with the investigation. On 22.02.2021, this Court has directed her to appear before the Investigating Officer of the police station concerned on 23.02.2021. This conduct of the applicant shows that she has scant respect for the law of the land and her conduct further disentitles her to any relief from this Court since co-operation with the investigation is a necessary condition for grant of anticipatory bail. 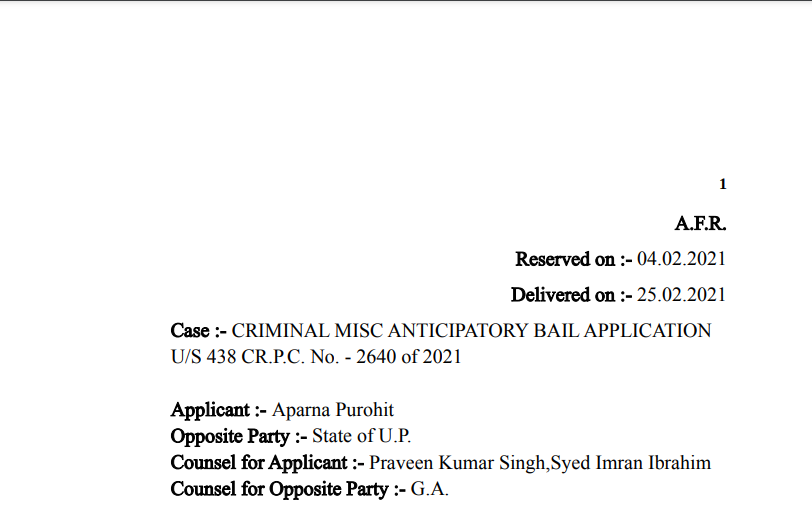 Allahabad HC Order in the case of M/s Jindal Pipes Limited Versus The State Of U.P.

Confiscation of Goods?- Books of Accounts could not be produced at the time of visit

Allahabad HC in the case of Bharat Forge Limited

Allahabad HC in the case of Ranchi Carrying Corporation Versus The State Of U.P.

Allahabad HC in the case of Anandeshwar Traders Versus State of U.P.

Allahabad HC in the case of M/s Torque Pharmaceuticals Pvt. Ltd. Versus Union Of India

Allahabad HC in the case of Nitin Verma Versus The state of U.P.

Allahabad HC in the case of M/s Ratan Industries Limited

Allahabad HC in the case of M/s R.J. Exim Versus The Principal Commissioner


buses on hire on monthly contract basis to vendor B